Play for a draw: Why elite Grandmasters lack fighting spirit 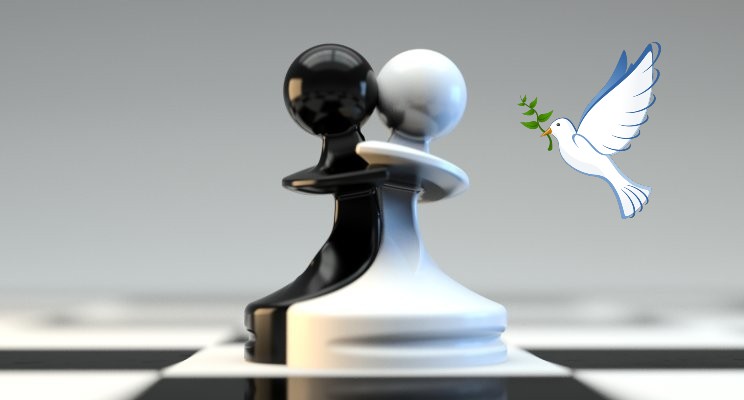 Play for a draw: Why elite Grandmasters lack fighting spirit

In a previous article, I talked about the controversial topic of prearranged draws. In this one, I want to call the attention to a related issue that I consider even more problematic. Chess culture and regulation has developed in a way that it makes elite players uncombative. Here is why they play for a draw.

First of all, I would liked to clarify that there is no need for prearrangement in elite chess. Players know each other well, and they understand when the opponent is aiming to make a draw. In addition, chess moves also give away tells as to the combativeness intentions of the players. Thus, when two players want to make a draw, a symbolic eye-winking move will suffice. These top players also have a remarkable ability to find draws by three-fold repetition in the most unsuspected situations. These are some of the reasons why it is hard to regulated prearranged draws in chess. You cannot prevent players from making good moves.

Why they play for a draw with Black

It is believed in chess circles that if the player with the white peices wants to make a draw, there is nothing the opponent can do. This is another deep feature of chess culture. Everything is set up, we could almost say “prearranged”, so that the the players with black play for a draw. Theoreticians work their openings with the aim to make a draw in mind. The most reputable openings for Black are those that maximize the probability of a draw, often called “correct openings”.

The rationale is that Black is “worse” a priori, and correct chess is a draw anyways, so there is no point trying to win with Black. This is why openings such as the ‘Berlin defense’ or the ‘Closed Spanish’ are seen much more often in elite chess than others like the best-scoring Sicilians. Of course, this reasoning is not wrong. The problem is that it can be applied to the White perspective as well. After all, if chess is a theoretical draw, it is so for both sides.

Why they play for a draw with White

With White, people play for “small advantages”. This translates to reaching a position that, although drawish, it is evaluated as favorable by the computer. The reason why they play this way is because it is unreasonable to play for “big advantages”. In other words, people just trust the computer evaluation.

This makes sense, because modern engines suggest very good moves and evaluate very accurately. There is always a risk that, if we play a suboptimal move, the opponent could have prepared a refutation. Similarly, if we got into an excessively complicated position, the opponent could be armed with some computer-assisted home recipe. Nobody wants to risk a White game this way.

It is important to realize that elite players are very risk averse. As I explained elsewhere, this is due to the way the system is set up. If you lose, you could drop out of the elite group. However, if you win, nothing very special will happen. It makes sense to play very conservatively with the White pieces as well.

As it often happens, culture develops under the assumption that agents will act in a nearly perfect rational manner. In reality, people make mistakes. It is true that elite masters play pretty accurately, but this is mostly because of the nature of the positions they choose to play against each other, where blunders are easy to avoid.

There is a reason why the best modern chess engines have ratings on the order of 3500, 700 Elo points above the best humans. Theoretically, this means that these machines would beat any human every game with virtually no draws.[1] This simple fact speaks of how much room for improvement there is in human games. However, the best chess engines are nowhere close to perfection. In fact, they keep improving at a steady rate.

Conclusion: Why do elite chess Grandmasters play for a draw?

As a chess theoretician, I understand the difficulty of creating a good openings repertoire to play for a win. This involves not only creativity, but also a lot of work and a lot of risk. As I explained elsewhere, elite players do not like risk. This is not just because humans are inherently risk averse, but also due to the nature of the system of chess competition. Therefore, Black players often play for a draw, while White players play for “small advantages”. In other words, elite grandmasters play to avoid losing with both colors. In my next article, I will talk about how to circumvent this problem.