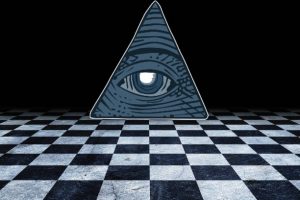 In the first part of the discussion, the issue of propaganda in chess was dealt with. In this second part, the panelists focused on the banning of individual players. The interesting thing about this discussion is that it shows us how chess executives make their decisions.

Τheodoros Tsorbatzoglou, Secretary General of the European Chess Union, started off the second part of the conversation with some legal housekeeping…

…. Housekeeping that everybody immediately ignored, as you will see shortly.

Jacob Aagaard, Grandmaster and prolific chess author:
Should Russian players be allowed in the Candidates Tournament?

Grandmaster and renowned author Jacob Aagard seemed very angry that unimportant issues were put to discussion. “I’m a busy person”, he said. In his opinion, the only matter worth consideration was whether Russian players should be allowed in the Candidates tournament. The rest of them proceeded to give their opinions:

Daniel Gormally, Grandmaster, chess author and columnist:
Karjakin should not be allowed to play because he is unpleasant

Grandmaster and author Daniel Gormally commented that Karjakin should not be allowed to play even after he already qualified. His reason: Karjakin is outrageous, inflammatory and entitled; not a nice guy:

“The question would be, is Karjakin playing the candidates or not. In my opinion, he should not play in the candidates. I think what he said is outrageous, it’s inflammatory… He comes across as an incredibly entitled human being; not a very pleasant person at all. And therefore I think he should be thrown out of the candidates, and that should the candidates.” Gormally said.

Peter Heine Nielsen, Grandmaster and renowned coach:
People with Russian sponsors should not be allowed to play

Everybody agreed profusely that Karjakin should not be allowed to play. But what about Ian Nepomniachtchi? Although he hasn’t publicly supported his country, he is also a Russian. Surprisingly, Peter Heine Neilsen thought Nepo shouldn’t be allowed to play either: he has the wrong sponsor.

“He (Nepomniachtchi) is sponsored by Simanovsky, who has Sima Land. He might disagree with the videos that Sima Land makes, where thousands of people are praising Putin both before and after the war, but he adds credibility to it. He’s representing Sima Land when he plays for the world championship and such, and so does Goryachkina. He is sponsored by obvious Putin propagandists who are supporting the war, and we shouldn’t let that happen.”

Yuri Garrett, Board Director of the Association of Chess Professionals (ACP):
You worked hard to classify but you cannot play? “Shit happens”

A bit too much, you may be thinking. Not enough for our next guest: Yuri Garrett, Board Director of the Association of Chess Professionals. When asked whether he thought Russians should be able to play under Russian flag, he replied vehemently:

“No, no! Absolutely not! never ever! Nothing associated with Russia or Belorussia. As long as the war goes on, and then we will see, is completely out of the question.”

So where does this stop? Is having a Russian girlfriend a good-enough reason for a ban? What if someone is a fan of the Spartak football team? It’s worth noting that, as Tsorbatzoglou had pointed out before, no player can be targeted based on his nationality. However, we are already accustomed to FIDE violating their own charter, so why bother with such minutiae?

But if you thought you’d seen it all, wait and watch this final remark:

“It’s unfortunate, I understand that this poor, he studied all his life, he wants to become world champion. But Americans like to say it like this: shit happens! I would say that quite some shit happened here. And I really think that it would be bad for the world to let a Russian become a World Champion for chess. I don’t know why if you ask me, but it really doesn’t sound good to me. If he’s Russian and he takes a stand against what it’s happening, then of course we’ll let him play.”