Unwilling propagandists. Why is FIDE acting as a propaganda hub? 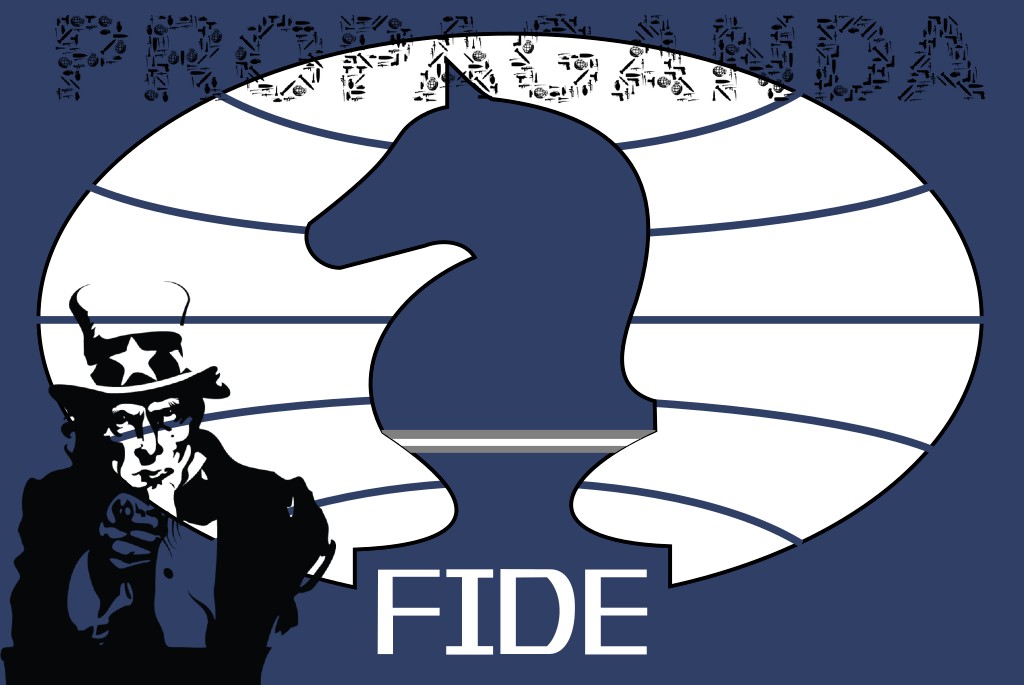 Unwilling propagandists. Why is FIDE acting as a propaganda hub?

This article explains how the International Chess Federation (FIDE) has become a tool for Western propaganda. It also discusses several implications of this problem.

Why are international sports institutions biased?

I must start by pointing out that the International Chess Federation is not the only sport governing body that has imposed a boycott on Russia: the IOC (International Olympic Committee), FIFA (football), UEFA (European football), the ITTF (tennis), the IJF (Judo), the FIG (gymnastics) are some of the organizations that have followed this policy.[1]

The question is why international sports institutions are acting on this war but not on others. The answer is that it is a feature of how the propaganda machine works. FIDE vice-president Nigel short claimed that the ban on Russia was made in order to preserve FIDE’s reputation: “Reputation is very important for a sports federation”, he said.[2] Reputation towards whom?, I ask; certainly not towards the Russian Chess Federation, the largest in the world, or its players for that matter. I don’t think FIDE will gain any reputation in the eyes of people who understand what’s going on.

Short continued, “We followed the lead of the International Olympic Committee” (IOC).[3] It is no surprise that most sports federations have acted likewise. Corporate-controlled sports institutions such as the IOC dictate what “reputation” ought to mean. Did you think there was a reputation index? “Reputation” means that if you don’t do what you’re told, you will suffer the consequences. When our enemies do this, we call it “pressure”; when we do it, it’s “reputation”. I cannot help but to wonder, is it reputable to be an insignificant cog in the machinery of Western propaganda? Wouldn’t it be better if we, chess players, the most intellectual of sportspersons, had risen above the herd?

I hope it is very clear to everybody by now that this is not a humanitarian concern. There is no coordinated action against the war in Yemen, Somalia or the illegal occupation of Palestinian territory. No action was taken by sports institutions against the illegal war in Iraq. This is a move by Western powers in order to control Ukraine for reasons of military strategy. The problem is that we don’t see it that way. Our financial structure ensures that the media goes along with the party line, effectively creating a snowball of propaganda spread. The whole system is fueled by people’s inherent tendency to share memes, creating a strong common sentiment and a collective call for action.

Hypocrisy of the International Chess Federation

There is no doubt that the invasion of Ukraine is a crime of aggression by international law, and a hideous act. I wholeheartedly agree that the International community should help Ukrainians as the victims of this injustice. However, unlike in the case of the Israeli occupation of Palestine, it is not clear whether interference in the Ukrainian conflict is void of dire consequences. Were NATO go on to take over Ukraine, a situation would arise in which two hostile nuclear superpowers would come in close contact. The result could be an escalation towards mutual nuclear destruction.

So why would FIDE make a dubious decision on moral grounds (interfering in the Ukrainian war) when a straightforward one (the Palestinian cause) was at hand? Furthermore, FIDE didn’t just ignore the Israeli occupation of Palestine: they supported it by protecting Israel from independent boycott by the Iranian Chess Federation. Just to be clear, I’m not claiming FIDE or the chess community has any power of influence to change the course of International affairs. FIDE made a symbolic move in order to improve its “reputation”, making it transparent that the chess community has become an instrument for power.

The responsibility of the Chess Community

It is evident that Ukraine has a special significance for the chess world, as it is one of the greatest chess Nations on the planet. We all known some Ukrainians that are suffering as a result of this unfortunate situation. This is why I believe that the International Federation should have acted as a force of unity, and invested the resources into aiding the Ukrainian’s plight. On the contrary, FIDE gave up on Russian sponsorship, significantly reducing its budget. In addition, the Russian chess community has been ostracized, violating the maxim of the organization, “we are one family” (“gens una sumus”).

Nigel Short defended the organization he represents on the grounds that “FIDE can’t be neutral when somebody is invading a country.”[4] It is desirable for large communities to have a sense of responsibility. There are many ways in which we chess players can make a positive impact on society. However, nowhere in the FIDE charter it is specified that the institution has any purpose but the promotion of chess and chess players. Thus, there is a risk that the Federation will be used as an instrument for private or political interests, under the pretext of a good cause. FIDE managers made a unilateral decision on moral grounds, in violation of their own charter, and based on a directive from above.

The risks of herd mentality

I think most people don’t realize the risks associated with herd mentality. The truth is that no leader ever caused any trouble without the compliance of fanatic followers. And this is where the chess community could have made a difference, by stopping the propaganda rather than engaging in it. The fact that chess is such a popular sport both in Russia and Ukraine could have opened avenues for communication and diplomacy. That is how wars are stopped; never by creating divisiveness. And incidentally, that is what FIDE Mission and Role is, as stated in the Charter of the organization.

It is worth noting that even the Russian chess players were against the war, with just a few exceptions. However, FIDE officials and other chess executives decided to strip the chess community of its personality and idiosyncrasy over a concern for “reputation”.

The responsibility of Chess Intellectuals

Of course, this situation is not entirely to be blamed on these decision makers. The intellectual elites of chess have done no better, by engaging in a propaganda war rather than providing the brainpower and the intellectual values that our community, as well as society, so desperately needs. They have shown the same irrationality and lack of intellectual refinement of the majority; acting with fanatic impulsivity disguised as determination in the face of emergency. They called for censorship as a way to stop the propaganda, what an irony. Surprisingly, even the highest-minded of chess players see international politics as a black-and-white, good-and-evil duality. There was an emergency indeed, but it went unattended.

There is one simple way to try to stop the propaganda: first stop engaging in it. I got the impression that any glimpse of contrary information is seen as an extreme threat to society, while the tons of manipulative lies that run amok in our society are seen as completely harmless. Similarly, the crimes committed by our leaders are seen as naughty, at best. One prominent chess writer even described these crimes as our quest for the spread of human rights across the globe. Nothing short of astonishing naivety. But somehow nobody is fighting against this propaganda, one that killed millions and the one that really matters for us.

The International Chess Federation (FIDE) has become a hub for Western propaganda. Chess intellectuals and influencers have joined the propaganda war, rather than acting as a firewall against it. Recent illicit measures by FIDE have divided the chess community. FIDE is not the only sports Federation one who has turned into a tool for Western propaganda. The implications of this state of affairs could be dire for chess as well as for sports and society as a whole.